Student Critiques of their Work: Art 4 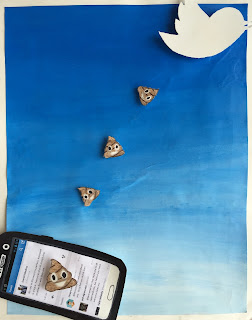 This project was really interesting to do because it meant something to me personally when I was younger. To make this project I wanted to use different mediums to resemble the things you would normally see these objects as. I made the twitter page in the computer by making a template of how a comment would look like on a mobile device. The sky is painted using different values of blue and the poop emoji is made from colored pencil.
From the start, we were asked to make a piece of art that would represent/have meaning on a social issue that is going on across the world. For example, global warming, bullying, and abortion are just few of many issues that we see every day on the news. The meaning behind my piece however, relates to me because I was a person affected by a bully on social media. Back when I was in middle school, I was normally picked on as a person who would be polite and caring to both my teachers and fellow peers. I was sometimes referred to as the teacher's pet because I loved helping my teachers out in any way I could. Most of the time, I would spend time focusing on assignments that were being assigned to us at the beginning of class and not worrying of others, but this all changed.
When I first made a social media account I did not know what to expect from it, but as time went on I learned a very valuable lesson. This lesson was: friends can sometimes become your enemies and begin to have hatred for you. As the school year went on, I got picked on and when people said negative comments, I tended to get upset. This process of me being a victim of cyberbullying has made an impact in my life where I grew strong and accepted what others had said about me. People can say things to others and hurt you along the way, but if you have the right mindset and you don't care what others say, you can be a unique person. ​


I chose to do this issue on cyber bullying because every day thousands of teens are getting bullied on a social media pages whether they are a little kid or a grown adult. Being bullied is not something that should be taken as a joke because teens have the highest rate of suicide as of right now because they are being bullied. ​I struggled to overcome this obstacle in middle school, but that did not stop me from continuing on in what I like to do best. 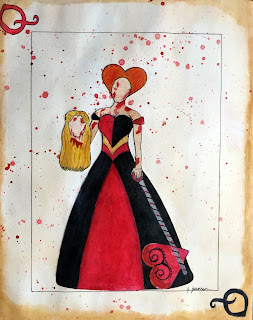 Queen of Hearts Critique, Josh, Art 4
“Revenge that comes from the Heart” is a mixed media piece created with watercolor and color pencil on watercolor paper. The subject matter of this is the Queen of Hearts and she is holding Alice’s head. The objective for this piece was to create an original character or create an original version of a character.

I created my own design for the Queen of hearts by changing her clothing and her hair style. Her outfit is red and black with a gold belt. The background and the edges are in different shades of brown and there red and black “Q”’s that are opposite of each other. The queen is holding up Alice’s bloody head and there are blood stains everywhere.

Posted by Windy Lampson at 6:11 PM