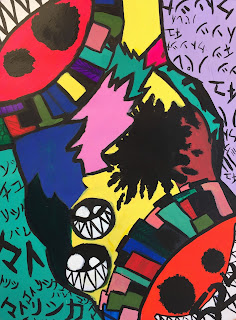 Matryoshka by Dianna, Art 2
This is an abstract painting that I recently made called ‘Matryoshka’ after the Russian Dolls. The medium is acrylic paint.


When I was making this project, I just wanted to quit and not even turn it in. I listened to various songs and looked up abstract painting techniques. I wanted a neon, crazy looking abstract vibe/feeling to it, but it really didn't come off that way. I used bright neon colors and mixed up colors too. I wanted to be like the professionals, but this is my first abstract project.Planning carefully, I didn't want a focal point anywhere in my painting. I wanted the viewer to look everywhere, and to be confused trying to figure out exactly what they’re looking at. 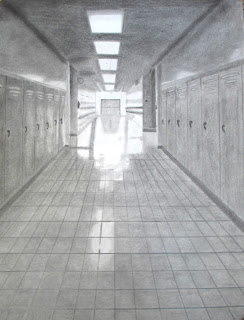 By Jeannette, Art 2
I created this artwork using ink pens. It features zentangle, micrography, and stippling. I feel I could’ve stippled the hair more. The lines of words by the sun and moon, I could’ve made it more straight. I forgot to shade the other sleeve, but I think it works out. I made this whole piece while thinking about opposites, everything that is good and bad. So I titled this piece, Opposing Sides. Most of my micrography has something to deal with opposites, but some of it contains parts of my pen name I created for myself. 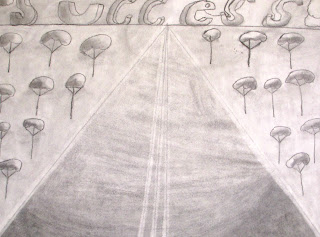 Success  by Japreme, Art 2
The objective of this project was to create a linear perspective drawing with accurate shading. I think I did well on most of the project. However, I think I could’ve shaded a little better. Other than the shading, I believe my project was very good. As you can see it clearly says “You’re on the road to success.” I did the project this way because it’s true. In high school we are all on a road to success by becoming successful people after high school and or after college. It’s something that I thought people should see to motivate people to get on the road to success if not already.

Abstract painting by Daequan, Art 2
In this abstract painting, I used blue, red, orange, green, purple, yellow, and black. While painting the project, I was trying to be a little creative because in most of my artwork, I never try to be creative or actually try to complete it. The reason I did some designs was because I probably liked the colors and I thought people would appreciate the creativity behind it.

I was unsuccessful because I tried too hard to make it creative and I messed up a lot of times where you could actually tell that I messed up, so I think I should’ve planned it better, or while I was doing it I should’ve thought harder about the colors I used. I was also unsuccessful because of where I painted most of the stuff. For example, I think some of the stuff I painted should’ve been in different places or smaller.

I think I will get a bad grade on this painting just because it’s bad, and I definitely could of done better, but I chose to rush because I wanted to hurry up and get it finished.
Posted by Windy Lampson at 9:28 PM