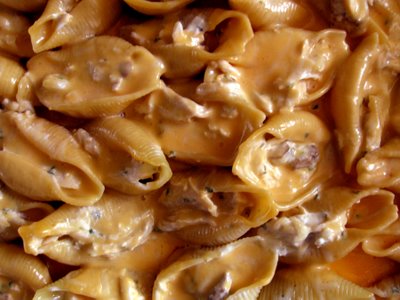 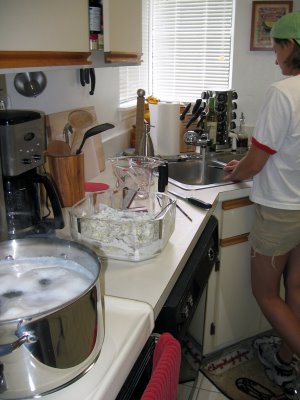 why is it that when people who don't cook first try to cook, they always pick something really difficult? that sounds like it was pretty elaborate, no wonder it took you 2&1/2 hours. lately, i've been focusing any cooking efforts on my grill that we got a few months ago. with gilli's help, we've come up with a pretty good recipe for some chicken fajita quesadillas. well, congrats on the shells, they look quite good. in fact, i'm a little hungry now. too bad lunch is still several hours away. thanks a lot, windy.

i use that same measuring pitcher for making pancakes.

I am very impressed! the dinner looks good. I made the broccoli salad last night, too, but liked it raw. maybe that is an acquired thing... so I guess you don't want that when you come here- what special meal would you all like to order?

are you and jeff going home to g-boro?

yup- I'd rather not say when though... if you know what i mean.